After the Christmas activities it was time to start our departure from St. Louis,"De sooner De better" as the saying goes. Weather turning cold and snow in the forecast.

Our plans were to head to Red Bay for some much needed repairs and upgrades. Our lovable Bus was approaching 7 years old and many of the appliances had decided to go on a coop. 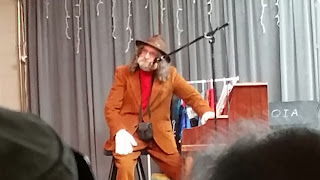 We arrived in Red Bay December 28, 2016 and waited for the Service Center to open up on January 2, 2017. Red Bay Service Center shuts down for about 2 weeks over the Christmas - New Year time.

After all our work was completed, we were behind schedule. We had a rather difficult time getting the Aqua Hot fixed.

We were due in Quartzsite\, AZ to meet with David and Brenda Boot at the OberFest Get Together. We missed the better part of their festivities but all in all had a great time with them and then stayed on out in the BLM area to view the Quartzsite RV Show. 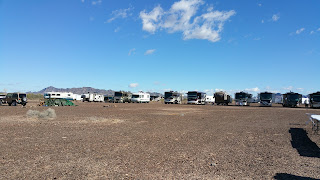 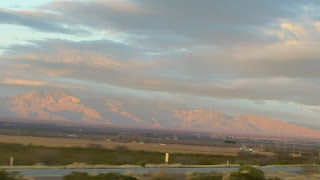 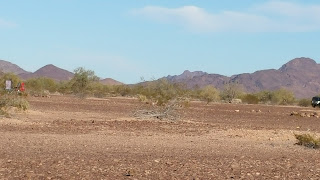 It had been many years since we had been to Quartzsite and we thoroughly enjoy the quirky little town.

Saw us head for Yuma, AZ. We tried the Escapees KoFa Park and we were not impressed. We also had been here several years back and we didn't like it then either.

So I started going thru the RV Show literature looking for some coupons for RV parks to try.

After visiting several we settled on a 55+ Resort. Fortuna De Oro is located in the foothills of Yuma of I8, exit 14. We took advantage of a 3-night free stay coupon. We had such a great time and we were surrounded by a great group of RV couples manly from Canada and a current workamper couple. We extend our stay until early March and a great time. The men introduced Art to thrill of ATV riding. I often went to the quilting session. Bingo was also a favorite pass time.

We spent several hot and dusty days attending The Rally in the Valley, in Chandler, AZ. Not impressed. Very disorganized and way too big. We did attend some very good seminars and one night of great entertainment.

We had plans to stop back in Red Bay, AL to have a few tweaks addressed on the motorhome on our way to St Louis.

Chris Berry from MakingSawDust rebuilt my kitchen cabinets. Many of the rails and the bottom of one cabinet was not holding up. 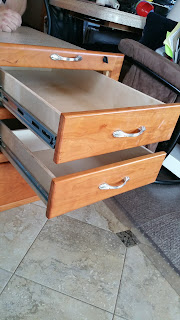 We parked at Red Bay Self Service Campground, which is our favorite place to stay. Not as noisy and less dusty. We met up with quite a few friends that we have gotten to know over the years.

We got together with a total of 6 couples and we headed to Reeves Fish and Steak House in Golden, MS. A favorite of ours. 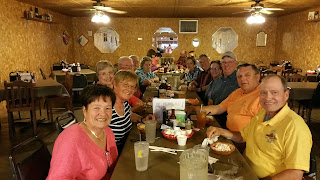 We also went to a favorite Mexican Restaurant in Belmont but I didn't get any pictures.

That pretty much sums up our travels. We are currently in St Louis, MO for the summer. I will have a left shoulder total replacement on April 14, 2017 and stay for rehab.

Welcome To Our Blog. A Record of Our Journey

A personal account of our life as RV'ers. Workamping, our way around the country. Seeing and doing exactly what we want, when we want and how we want. We travel in a "new to us" 2007 Allegro Bus 42' Motor Home made by Tiffin Motor Homes located in Red Bay, AL. Traveling along with us is our very spoiled beagle. Simon, who also does what he wants,when he wants and above all how he wants.

Disclaimer: I write for fun. I write to have a log of our adventures, friends and things we see and do. If there are some grammar blunders or spelling hurdles along the way, so be it, get over it and enjoy life. Don't sweat the small stuff.

You Have To See Quartzsite At least Once

A LITTLE BIT ABOUT US

Art and Gerri
Anywhere we roam, Alabama, United States
We are the two Balls.Gerri & Art.We have been married 38 years and have raised two adventurous boys.Our home is a new to us 2007 Allegro Bus,we tow a 2004 Chevy Silverado.Traveling with us is our beagle mix dog.We have done workamping/volunteers at Escapees C.A.R.E. an organization we feel very committed to.We have also served as Camp Host at California State Park.We also spent two winters at a nature center.I assisted the Director with reptile presentations at schools, community events and private tours.I also assisted in the care and cleaning of reptile cages.Art takes care of maintenance matters, feed the farm animals and helped repair cages. We are both retired. We are long time residents of St.Louis, MO. I am a retired Real Estate Agent of 15+ years, working the past six for a Rehabber. Prior to that, I was an Educator/RRT at a children’s hospital. I hold a B.A in Health Care Education. I love photography, sewing and cooking. Art is a retired accountant and retired a second time from Real Estate with me. We love this lifestyle of working,relaxing and meeting new people.

Our Favorite Links for Fun,Pleasure,Eating & Shopping. Links to More Pictures For Our Travels